THE PALACE OF THE GREEK-CATHOLIC BISHOPRIC

The headquarters of Oradea’s Greek-Catholic Bishopric

A center of spiritual life.

Monument Not Open to Visitors

On August 25, the Palace of the Greek-Catholic Bishopric was affected by a devastating fire that destroyed the roof and the interior of the upper floors.

The Greek-Catholic Episcopal Palace from Oradea, located in the Union Square, takes its present form in 1905. The architect of the palace was Rimanóczy
Kálmán Jr., the most important architect from the 1900- 1912 period.

Until the first decade of the 20th century another baroque-style building was in its place – the seat of the Romanian Church United with Rome. In 1778 it was added another floor, and after the fire of 1836 it was rebuilt. Between 1874 and 1875 a new wing was built on Mihai Pavel Street, and the late baroque façade was modified by master Imre János.

Bishop Demetrie Radu ordered architect Rimanóczy Kálmán Jr. the design of the present appearance of the palace. The demolition works of the old building (preserving some parts of the old one) began on 10th of August 1903, and the building was inaugurated on 11th of July 1905.

The stairs with two ramps, the massive railing and the pillars surrounding the stairs are made of pink-red Vascau marble with white veins or yellow marble. Above the stairs in the hallway there was a large glazing panel, built from stained glass decorated with vegetal elements. The light that penetrated through the beautiful stained glass colored the large hallway in different shades and shapes.

The bishop’s residence and the most important rooms were upstairs. The offices, the kitchen and the guest rooms were at the ground floor. The Great Dining Room (as it was called on the construction plans) was probably used as a Congregation Hall. The hall was made in neo-gothic style and was covered with a stellar vault decorated with vines. The whole room was painted in pastel green. The stove was made of green tiles, and the massive chandelier was also neo-gothic.

The offices on the side facing Mihai Pavel street or the Square Hall on the corner of the building, Mihai Pavel street corner with the Union Square could be accessed from the Great Dining Room. This room was decorated in a baroque, rococo styleand was covered with a hemispherical vault. The ault is decorated with vines, with pastel leaves and flowers. The Great Hall facing Union Square was the most spectacular room in the palace and also most decorated one. In the project, the Hall was named the Great Hall, decorated in eclectic style. The stucco ornaments were polychrome or golden, placed on walls and ceiling. The chandelier was massive, made in bronze, decorated with leaves and sunflowers.

At the moment, the palace is currently under a rehabilitation process after the fire of 25th of August 2018. The rehabilitation works are scheduled for a period of three years. 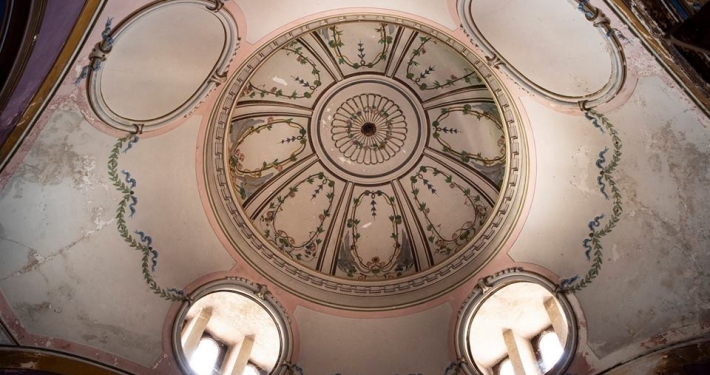 The Palace is a monument that is not open to visitors, as it is in the process of rehabilitation.

Other Monuments in the Area

The Palace of Moskovits Adolf and Sons

The Church of Saint Ladislaus

This website uses cookies to improve your experience while you navigate through the website. Out of these cookies, the cookies that are categorized as necessary are stored on your browser as they are essential for the working of basic functionalities of the website. We also use third-party cookies that help us analyze and understand how you use this website. These cookies will be stored in your browser only with your consent. You also have the option to opt-out of these cookies. But opting out of some of these cookies may have an effect on your browsing experience.
Necessary Always Enabled
Necessary cookies are absolutely essential for the website to function properly. This category only includes cookies that ensures basic functionalities and security features of the website. These cookies do not store any personal information.
Non-necessary
Any cookies that may not be particularly necessary for the website to function and is used specifically to collect user personal data via analytics, ads, other embedded contents are termed as non-necessary cookies. It is mandatory to procure user consent prior to running these cookies on your website.
SAVE & ACCEPT