The third largest in Europe!

A simplified modern replica of the Synagogue in Nuremberg.

The temple was built by the Reform Jews of Oradea in 1878, as a result of their separation from the Orthodox Jewish community in 1870. The project was handled by Busch Dávid, the chief architect of Oradea and a member of the Jewish community.

The construction of the imposing 1000-seat building was entrusted to Rimanóczy Kálmán, Sr., a resounding name in Oradea architecture and a master of the eclectic style.

The synagogue is a simplified modern replica of the Synagogue in Nuremberg.

Within the rigorous limits of a square parcel of land, the synagogue has a basilica-like spatial arrangement with three naves. It is oriented towards Jerusalem, on the east-west axis. The cubic volume is surmounted by an ample Easternized profile, featuring a discretely bulbous line that seems to float above the roof. The floating effect is due to the tambour that is rhythmically punctuated by sixteen ample windows which resemble arcades that close off with semicircular arches (Roman arch). This type of window, which is similar to an elongated ample arcade closing off with a semicircular arch, constitutes the leitmotif of the façades. The intention was to create the effect of a triumphal arch on them, which was inspired by Renaissance architecture, itself inspired by Roman architecture. The most spectacular effect occurs on the southern façade, which is representative due to its visibility from down on the street, as a central jutty rhythmically punctuated by four pilasters imbues the façade with a monumental visual effect. It is decorated with five very ample windows, all of them topped by a lacework of decorative wooden rosettes with Eastern motifs and an octagonal trajectory. These Eastern motifs are abundant both on the exterior and the interior of the building.

On the exterior, the compact volume of the central section evokes the architecture of the Dome of the Rock on the Temple Mount, which shelters, according to the Jewish faith, the Foundation Stone that the world was created from. The sacred stone marks the place where, through Abraham’s act of faith, God’s covenant with Abraham was made, and the Ark of the Covenant was placed in the Temple of Jerusalem.

The Neolog Synagogue of Oradea can be connected to the Synagogue of Nuremberg, which was erected in 1874 by the river Pegnitz and demolished in 1938, but the concept of the former is far more modern due to its essentialized design. In the interior, the painted decoration is entirely inspired by the Moorish style. Its author is the painter Horovitz Mor of Košice. The ornaments are strictly geometrical, with central motifs like the Star of David or the eight-petal rosette, as well as seemingly infinite repetitive modular motifs. These are painted in chromatic harmony, creating refined visual rhythms. The decorative embroidery diminishes the massiveness of the load-bearing walls. The cast iron poles that separate the naves also rhythmically punctuate the area, leading one to look towards the niche with the ark meant to keep the Torah’s scrolls. An iron grate marks the sacred area. It is decorated with floral motifs whose supple design foreshadowed the new artistic movement that was about to make its presence felt in Oradea as well, namely Art Nouveau.

There is an organ above the niche of the Torah ark. During the restoration of the synagogue, a hermetically sealed bottle was found containing a message written in 1878, from which we will glean the following: ”…între aceste ziduri să se ţină slujbe demne de religiozitatea pură şi de progres, din amvon să se ţină predici despre religia şi morala purificată de zgura sofismelor…” (”between these walls, let there be service worthy of religiosity that is pure and informed by progress, may the pulpit let ring sermons about religion and morals purified of the soot of sophistry…”).

The rehabilitation of the synagogue was carried out based on the trans-border project coordinated by the municipality of Oradea in association with the Jewish Community of Debrecen. The specific objectives were the functional rehabilitation and reconversion of the Neolog Synagogue, and its introduction into the national and international circuit of tourism. Now that it is completely restored, the synagogue has become a space destined for contemporary arts. Events meant for the general public are organized here: concerts, exhibitions, book launches, and various other cultural or religious events. 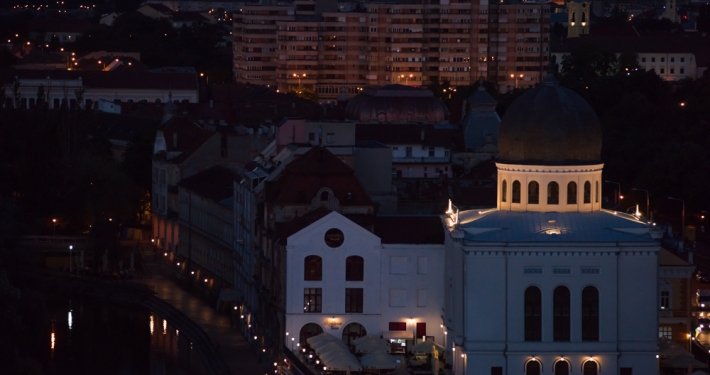 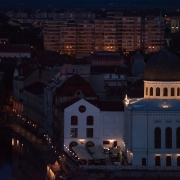 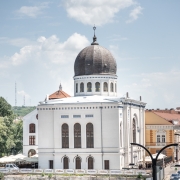 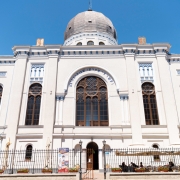 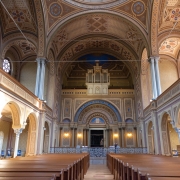 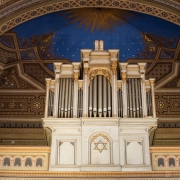 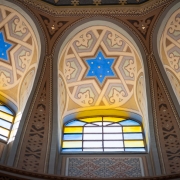 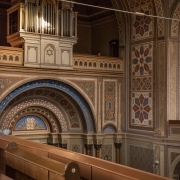 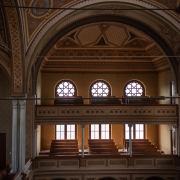 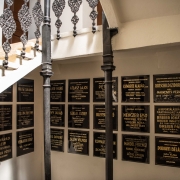 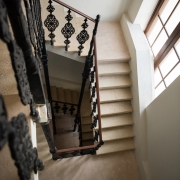